Yesterday, the United States Supreme Court issued its decision in PPL Montana, LLC v. Montana, No. 10-218 (Feb. 22, 2012), which reads more like a wonderous travelogue than a judicial opinion.  The decision can’t help but inspire one to put on a pair of hiking boots and set out for Montana.  At least, the Montana explored by Lewis and Clark and that joined the United States in 1889. 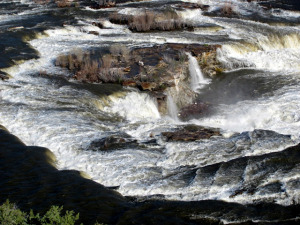 At issue was the State of Montana’s attempt to collect rent from power company PPL Montana for PPL’s use of the riverbeds under the Missouri, Madison and Clark Fork Rivers.  Montana claimed ownership to those riverbeds on the basis that they were navigable in 1889 and thus became the property of Montana upon its statehood pursuant to the equal-footing doctrine.   (The equal-footing doctrine holds that ownership of the beds of navigable waters become vested in each state at the time the state is admitted; title to non-navigable waters, to the extent not transferred, belongs to the United States.)  PPL did not contest this general principle, but argued that the inquiry as to nagivability for title purposes must be made on a segment-by-segment basis and the specific stretches of rivers upon which their dams were built were not navigable, at least not in 1889.  While the Montana Supreme Court did not outright disagree with the legal argument, it held that the stretches, at least one of which was 18 miles long, were merely “short interruptions” which could be circumvented by portage of watercraft, and thus did not impair their navigability.

The United State Supreme Court reversed, holding that there was no “short interruption” exception to navigability and, even if there was one, these significant stretches would not qualify.  Indeed, the fact that portage was required, the Court held, was evidence of the rivers’ non-navigable status.  The Court also clarified the difference between the navigability inquiry for purposes of federal regulation of commerce on waters of the United States and that for title.  For the former, the question is whether the body of water itself, or in connection with other bodies of water, was or is  a channel for interstate commerce, whereas the latter inquiry is whether the particular stretch of water was navigable in fact at a previous time.

Having addressed the legal inquiry, the Supreme Court then turned to the factual one.  It concluded, based upon undisputed evidence, that a 17 mile stretch of the Missouri River was non-navigable.  It also suggested that, based on the evidence in the record, neither of the other river areas were navigable, but remanded for the state court to make further factual determinations based on additional guidance provided in the opinion.  Among other things, the Supreme Court instructed that evidence of present day use is relevant only if it is reflective of the use that could have been made at the time of statehood, taking into consideration the condition of the river at that time and the type of boats then available.   In other words, only if Lewis and Clark’s expedition could have traveled along the stretch may Montana lay claim to the riverbed, otherwise, ownership belongs with the United States.